Shane Watson to lead RCB in absence of Virat Kohli in IPL 2017: Report

Shane Watson to lead RCB in absence of Virat Kohli in IPL 2017: Report

RCB s regular captain Kohli had injured his right shoulder during the third Test between India and Australia last month at Ranchi.

Shane Watson was on late Monday night revealed as the captain of the Royal Challengers Bangalore (RCB) in place of Virat Kohli, who is nursing an injured shoulder. With another RCB stalwart, AB de Villiers, in doubt for the opening game of the IPL 2017 against the Sunrisers Hyderabad (SRH), Watson was elevated as the captain in place of Kohli. RCB s regular captain Kohli had injured his right shoulder during the third Test between India and Australia last month at Ranchi, and was ruled out of the fourth game as well. It was then revealed that Kohli would miss the initial stages of IPL 2017. FULL CRICKET SCORECARD: Sunrisers Hyderabad (SRH) vs Royal Challengers Bangalore (RCB), IPL 2017 Match 1

The runners-up of IPL 9, RCB will face SRH in the opening clash of IPL 2017 on April 5. Their second match will be against Delhi Daredevils (DD) on April 8, while two days later they will face Kings XI Punjab (KXIP) on April 10. RCB will be light on their firepower as they already have lost the in-form KL Rahul to a shoulder injury for the entire season, and with Kohli being away for the initial stages, their batting looks light.

According to Cricbuzz, Watson will remain RCB captain till Kohli is not completely fit. Watson, who had retired from all forms of cricket last year after the ICC World T20 2016, has previously captained the Rajasthan Royals (RR) who are currently serving a two-year ban.

Watson had recently hinted at moving up in the order for RCB, especially in absence of Kohli and Rahul. In the absence of Virat and KL Rahul, there are chances that I would be asked to bat at the top a position which I enjoy the most and have been doing well, all his career. However, he will be happy to bat at any position, Watson told reporters at the RCB training session on Saturday. 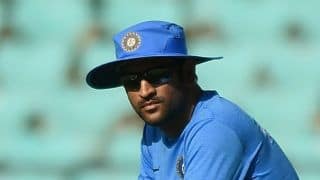