Australian coach Mickey Arthur says Ricky Ponting's retirement opens the door for Shane Watson to drop further down the batting order, but would not be drawn on the contenders to replace him. 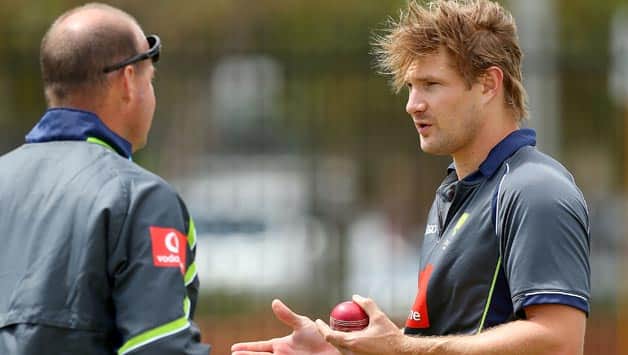 Australian coach Mickey Arthur says Ricky Ponting’s retirement opens the door for Shane Watson to drop further down the batting order, but would not be drawn on the contenders to replace him.

Watson returned from a calf injury in the third Test against South Africa, making 10 and 25 batting at number three as South Africa won by 309 runs to take the series 1-0.

Despite establishing himself as a Test opener in recent years, there has been speculation about Watson’s best role in the team and his ability to continue to perform with both bat and ball given his long injury history.

He only bowled nine overs in each innings in Perth but Arthur said the retirement of Ponting, who batted at four, offered the opportunity to drop the powerful right-hander down a slot for the Sri Lanka series.

Arthur said the selectors were keen to replace Ponting with a batsman who could fill the role at number three, with Rob Quiney, Phil Hughes and Usman Khawaja all seen as in contention.

“Without wanting to name names, it will probably be a guy who will come in and bat three and possibly a move for Watto at four,” Arthur said.

“It just looks right and gives us a bit of stability.

“We’ve got in our minds who we think the guy is, but we still need to discuss that as a selection panel and then sit down in Hobart next Monday when we arrive there and make a decision on what our preferred batting order is going to be.”

While the coach did not want to anoint Ponting’s replacement, the man himself nominated Quiney, who played in the first two Tests against South Africa before making way for Watson.

Hughes, the leading Sheffield Shield run-scorer and second highest domestic one-day run-maker this season, and Khawaja are also in the hunt to take the spot for the first Test against Sri Lanka in Hobart on December 14.

Arthur shied away from possibly pushing Michael Clarke up the order, but conceded Australia must solidify their top four rather than constantly rely on the captain and Mike Hussey to steady the ship after the loss of early wickets.

“We know that we’re really well covered at five and six,” Arthur said.

“We just need one, two, three and four to be giving us a really good platform, I guess, and that’s something we’ll have a look at.

“There’s not a massive amount of Test caps there when you take Watto aside and you’ve got to give those guys time to grow and be a little bit more consistent.

“They’ve shown us they’ve got the goods, we’ve just got to be patient with them.”