Rajasthan Royals skipper Shane Watson led by example with the ball with a scintillating hat-trick to restirct Sunrisers Hyderabad (SRH) to 134 for nine after electing to field after winning the toss in the 30th match of Indian Premier League (IPL) 2014. Watson’s opposite number Shikhar Dhawan gave Hyderabad an electric start before Rajat Bhatia‘s medium pacers completely stifled Hyderabad under bowler friendly conditions.

Hyderabad would have had their hearts in their mouths when the first ball of the match by Kane Richardson taking the toe edge of the Shikhar Dhawan’s bat and running fine to the boundary ropes, missing the stumps by inches in the process. The fourth ball of the over was short and wide by the bearded Australian and latched on to it with a ferocious cut shot to the boundary. Dhawan was in on the attack yet again with a lovely off drive and then cut behind point with bisected two fielders. Richardson’s second over also produced a couple of fours and Dhawan was looking menacing at the crease.

In an attempt to atone for his tentative stays in IPL 7 so far, Dhawan grew in confidence and dispatched a couple of Shane Watson’s loose deliveries and looked poised for a big score. Watson continued his good show with the ball from his previous match against Kolkata by cramping Dhawan for room and the ball breached the southpaw’s defence and clipped the top of the off-stump bail. The highly-rated Bangalore batsman KL Rahul came in a caressed a cover drive and a wonderful straight drive to the boundary ropes.

After the first strategic time-out, Aaron Finch decided to get a move on and spanked Rajat Bhatia for a boundary, beating the long on fielder. Finch tried the same shot again, this time lofting the ball to clear the fielder in the deep but Ajinkya Rahane took a terrific diving catch, showing great athleticism and safe hands at the same time. After getting a good start, Rahul failed to read Bhatia’s medium-pacers and was castled to leave Hyderabad in a spot of bother. With his team banking on him to stay till the end, David Warner failed to read the devastatingly consistent old warhorse Pravin Tambe and was smartly stumped by Sanju Samson.

Another Sunrisers batsman was guilty out not building on his start as Naman Ojha was also beaten by a slower delivery by Bhatia and was clean bowled. Earlier, After the first strategic time-out, Aaron Finch decided to get a move on and spanked new bowler Rajat Bhatia for a boundary, beating the long on fielder. Finch tried the same shot again, this time lofting the ball to clear the fielder in the deep but Ajinkya Rahane took a terrific diving catch, showing great athleticism and safe hands at the same time.

Proceedings were rather laboured for Hyderabad and runs were hard to come by and which is what led to Moises Henriques hitting out to to Rahane’s throat at long-off. Scalping Dhawan’s wicket earlier, Watson was on a hat-trick. Karn Sharma was the batsman and a tentative fish outside off-stump landed safely in Samson’s hands and Rajasthan had their second successive hat-trick in Ahmedabad. Desperately looking for quick runs, Dale Steyn ran himself out in the last over. The comical moment of the IPL so far came with dazed Amit Mishra, Inzamam-ul-Haq style stood outside the crease while the Rajasthan bowlers had two attempts before Samson hit the stumps in the third attempt while Mishra could not be bothered. Irfan Pathan crashed the ball down the ground of Richardson for a boundary to take Hyderabad to a respectable but modest total. 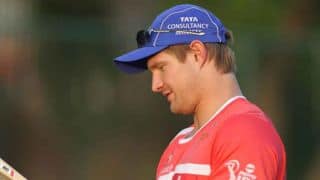 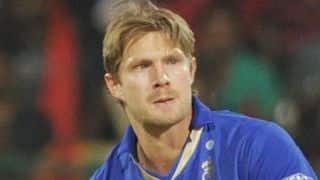