After picking up his maiden five-wicket haul in the ongoing second Test against Pakistan, Shannon Gabriel pointed to that moment as the turning point.

Abu Dhabi: When fast bowler Shannon Gabriel was forced out of the tour of Australia with an injury in December 2015, it seemed a massive setback but after picking up his maiden five-wicket haul in the ongoing second Test against Pakistan, the speedster pointed to that moment as the turning point of his career. The strapping right-armer bowled with sustained pace to end with five for 97 as Pakistan were dismissed for 452 in the first innings of the second Test at the Sheikh Zayed Stadium on Saturday, reports CMC. Gabriel, who picked up a left ankle injury during the Hobart first Test against Australia and had to return home, said the time away had given him a new perspective on his career. LIVE CRICKET SCORECARD: Pakistan vs West Indies, 2nd Test at Abu Dhabi

“Coming back early from Australia, I had time to reflect and to come up with different ways of improving my career so I decided to get a little more fitter and I knew once I got fitter, I would be able to bowl better for longer,” he told reporters on Saturday. “Plus, I’ve been trying a few things and I’ve been getting the encouragement from Bish [Ian Bishop] and Roddy Estwick and I’ve just been lucky enough to go out there and back my skills and my ability, and put all that I’ve practiced into the game and it went well for me today.” LIVE Cricket Score, Pakistan vs West Indies, 2nd Test, Day 3 at Abu Dhabi

He was the best bowler on Friday’s opening day with two wickets and returned on Saturday to snaffle another three and limit Pakistan’s powerful batting to under 500 runs. On a flat track, he prised out Pakistan skipper Misbah-ul-Haq, leg before wicket (LBW) in the sixth over of the morning after the Pakistan captain had added only six runs to his overnight 90. Toby Radford: WI not demoralised following poor show vs PAK

He then accounted for the dangerous Sarfraz Ahmed for 56 before knocking over Zulfiqar Babar without scoring, to log career-best figures. “I think it was a good performance. It’s been something I’ve been waiting for a while now,” Gabriel noted. “Unfortunately it took 20 Test matches to come but at the end of the day, I’ll still take it and I hope it’s a sign of good things to come.”

The 28-year-old said, however, that bowling consistently quick on flat tracks in the UAE had been a difficult prospect. “I think it’s a bit hard [to bowl on these flat wickets]. It takes a lot of effort out of you and you just have to believe in yourself and believe in your ability and go out there and put the ball in the right areas,” he pointed out.

“At the end of the day, fast bowling is pretty tough and I’ve been doing this for some years now so I’m pretty used to it. I just run in with each ball and put just as much effort as possible.” The West Indies finished the day on 106 for four, still 346 runs behind Pakistan. 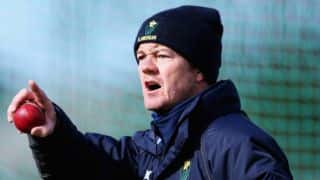