N Srinivasan is unlikely to contest for BCCI President post.

Jagmohan Dalmiya’s demise may have opened the battle for the top post of the richest cricketing body in the world. However, former chief N Srinivasan is not bothered by the competition. Speaking to Times of India a day after he returned from Dalmiya’s funeral ceremony from Kolkata, Srinivasan said, “I am just back from Kolkata. I have known Mr Dalmiya for a long time and known him as an able administrator. I feel sad he is no more. He is no more and today is not the day to discuss all this.” Srinivasan chose to remain silent about the recent falling apart. Jagmohan Dalmiya was a visionary cricket administrator, says N Srinivasan

However, a source close to Srinivasan revealed the Tamil Nadu head’s intentions of coming back into power. “Like it or not, we have the votes. It’s not the time to flaunt or flex muscles, but the truth is whoever wants to become the President has to come to us.” N Srinivasan, Sharad Pawar may play strong role in deciding next BCCI president

The source also went on to add that Sharad Pawar along with Rajeev Shukla will be joining hands with Srinivasan in deciding the future chief of BCCI. “Shukla was the first to propose Srinivasan’s name for the ICC Chairman’s post. And though there is a perception that Srinivasan’s equation with Pawar isn’t the greatest, the two are in regular touch. At the end of the day, it’s our group which decides who becomes the next BCCI president.” Supreme Court to decide if N Srinivasan should be allowed to attend BCCI General Body

Srinivasan is currently awaiting Supreme Court to allow the ex-head of BCCI to attend Annual General Meeting in a month’s time. According to the source, Srinivasan has the confidence of at least 10 votes out of 30. 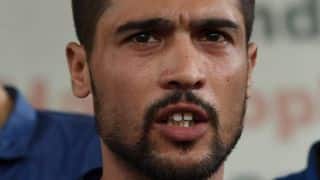 Mohammad Aamer: Not ready for international cricket yet