Shardul Thakur said Jeff Thomson has told him to be aggressive in bowling, especially when he is not getting wickets.

Mumbai: The key advise given by Australian pace legend Jeff Thomson to young Mumbai pacer Shardul Thakur, who has been picked in the 17-man Test touring party to the West Indies, is to maintain unbridled aggression as a bowler. “He [Thomson] told me to be aggressive in bowling, especially when I am not getting wickets,” said Thakur here today on the sidelines of the MCA-IDBI Federal Life Insurance Bowling Foundation’s media conference. Thakur said Thomson told him, “Try to get wickets, that’s how you will test your character. Be aggressive in your mind to get a batsman out. READ: Shardul Thakur watches ‘Fire in Babylon’

“He has told me a few things. I have been busy playing a lot of matches in the domestic season, but did not get much time to practise with him. Whenever I met him he spoke about his experience and shared a few things. He asked me to continue to do the things I have done in the past,” said the 24-year-old bowler. Thakur, who grabbed 41 wickets for Mumbai during its 41st title-triumph in Ranji Trophy in the season gone by after grabbing 48 wickets in the previous season, said even bowling defensively can be termed aggressive bowling under certain conditions. READ: Jeff Thomson sympathises with modern bowlers for having to bowl on flat pitches

“Sometimes bowling defensively also is bowling aggressively. It depends on the conditions,” he elaborated. For the Windies tour scheduled in July-August, Thakur has already started his fitness training. “Now I have started my fitness training and soon I will be bowling – in a week or so. There are a few things on my mind. I have to follow basics correctly. That has helped me a lot.” He has not spoken, as yet, to current or former players about the conditions he would encounter in the Caribbean. “I have not spoken to anyone. When I go there and when the team sits together, I will speak to the senior fast bowlers,” he said. 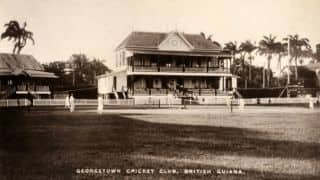