Sharad Pawar is being speculated to replace Shashank Manohar as BCCI president.

After much speculations, Board of Control for Cricket in India (BCCI) president Shashank Manohar resigned from the post on Tuesday, reports suggest. Manohar had taken over the post in 2015 following the sudden demise of then President Jagmohan Dalmia. The rumors of Manohar quitting as President were doing rounds for a long time now and names like Anurag Thakur, Rajiv Shukla and Sharad Pawar came up as potential replacements. With the retirement of the in-power Manohar now, BCCI’s working committee will soon have to look for someone who can take on the responsibilities. READ: 4 possible contenders for BCCI President’s role following Manohar’s resignation

Anurag Thakur, who is the BCCI secretary currently, is known to be quite close to Manohar and is being pitched as one of the strongest contenders for the post. “When Jagmohan Dalmiya was in power, it was Thakur who took the important calls. With Manohar’s entry, it had left Thakur playing second fiddle. It would be safe to assume with Manohar’s departure, Thakur would want to wrest back his position of power. Shukla too has been given complete control of the IPL and enjoys a lot confidence among most members,” a BCCI insider revealed to Hindustan Times.

Manohar wrote to board secretary Anurag Thakur to announce his resignation “with immediate effect,” in a move expected to trigger his bid for re-election as chairman of the International Cricket Council. “The BCCI confirms that Mr. Shashank Manohar has resigned from the post of President, BCCI,” Thakur said in a statement. “He has also resigned as the BCCI representative on the International Cricket Council (ICC) and the Asian Cricket Council. “The BCCI places on record its deep appreciation of the immense contribution to Indian cricket made by Mr. Manohar,” reported AFP.

As reported by India Today, Manohar will continue as the International Cricket Council (ICC) chairman while there will be an election on May 23 regarding that.

International Cricket Council (ICC) will start the process of selecting the President through election from May 14. 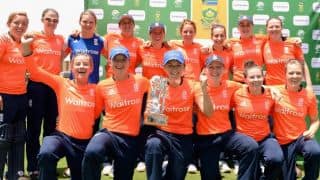