India were for 157 no loss after 26 overs in their first One-Day International (ODI) against Sri Lanka at Cuttack on Sunday. Ajinkya Rahane was batting on not out accompanied by Shikhar Dhawan on not out.

Rahane smashed eight fours and one six to reach 69 not out off balls, whereas Dhawan took balls and cracked 11 fours and two sixes to get to 80 not out.

Both Rahane and Dhawan made slow starts but picked up well and took India to a position of command. They brought up their half-centuries in the 21st over. 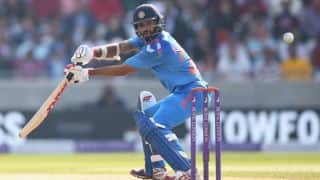