Warner hit Chahal for two sixes off successive balls in the 12th over.

The 12th over was bowled by Yuzvendra Chahal for Sunrisers Hyderabad against the Royal Challengers Bangalore in their Indian Premier League (IPL) 2014 match at Hyderabad. David Warner hit a six over midwicket off the very first ball. Warner hit another six off the next ball to make it 12 runs off two balls in the over. Chahal bowled well after that to end with just another single off the over.

Muttiah Muralitharan came on to bowl the 11th over. After bowling a dot ball to begin with, Warner hit a six over midwicket. Off the penultimate delivery, Dhawan hit another boundary over covers to make it 11 runs off the over. SRH looked in a very good position to pull off a victory in a must-win game.

Yuzvendra Chahal came on to bowl the 10th over. He gave away just two runs off the first four balls before nearly outfoxing Dhawan. Dhawan stepped out but ended up defending the ball. The final delivery yielded a couple of runs off the last balls.

Earlier, David Warner and Shikhar Dhawan set the tone for Sunrisers Hyderabad while chasing a target of 161 against Royal Challengers Bangalore in Indian Premier League (IPL) 2014. Both batsmen went after Bangalore’s front-line bowlers early in the piece. Dhawan explored the off-side field with utmost ease.

Even Warner showed his class by playing sumptuous strokes. In fact, they look set to chase down the target set by Bangalore. The switch hit he hit off Muttiah Muralitharan gave a glimpse of his skill. Bangalore’s bowlers really struggled to get their lines and lengths right. Earlier, On a wicket that was on the slower side, Bangalore  lost the plot early on, while playing against Hyderabad in IPL 2014 at Hyderabad. They lost both openers, Chris Gayle, the Jamaican marauder and Parthiv Patel early in the piece. However, Virat Kohli, Yuvraj Singh and AB de Villiers at the right time looked to up the ante and that helped Bangalore to amass 160 for the loss of six wickets on the board.

Earlier, in the 46th match of the Indian Premier League (IPL) 7 between Royal Challengers Bangalore (RCB) and Sunrisers Hyderabad (SRH), Virat Kohli won the toss and elected to bat first. RCB went in with the same squad. On the other hand, SRH made two changes. Amit Mishra and KL Rahul were replaced by Pervez Rasool and Venugopal Rao. 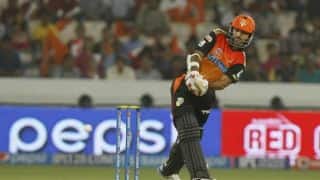