Pandya's hairstyle was not any intentional attempt but a mistake made by Shikhar Dhawan which was modified into what Pandya's hair looks like now.

When Hardik Pandya made his first public appearance with the unique hairstyle he is currently flaunting, many tried to find the inspiration behind it. Turns out it was not any intentional attempt but a mistake made by Shikhar Dhawan that was modified into what Pandya’s hair looks like now.

Pandya, talking to Gaurav Kapoor on Breakfast with Champions, revealed the story. Pandya explained that he had asked Dhawan to trim a part of his hair, but the opener mistakenly cleared up a major chunk from right side of Pandya’s head. He decided to go with whatever it had turned out to be. The all-rounder also said he is confident to carry the style.

Pandya, during the chat narrated, how he has struggled to achieve success. He spoke about the time when his family was facing financial crisis and he could not afford train tickets. Pandya remarked his IPL selection to be the major change of his career. 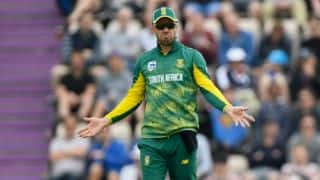