Shikhar Dhawan suffered another failure as he was dismissed by James Anderson late on Day Two of the third Test between India and England at Southampton. Murali Vijay and Dhawan opened the innings, but Dhawan was again snapped up by Anderson, caught in the slips.

England were in a very secure position as they declared their innings at 569 for seven on Day Two of the third Test against India at Southampton. Big knocks from Alastair Cook, Gary Ballance, Ian Bell, and Jos Buttler helped England pile on the runs.

Jos Buttler scored a fifty on Test debut in the third Test between India and England at Southampton, thereby becoming only the eighth English wicketkeeper-batsman to reach the landmark on Test debut. After a fidgety start, Buttler overcame his nerves to compile an aggressive half-century. The innings came at a time when England were struggling to score quickly. 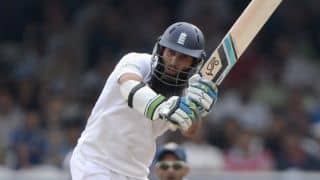