Shikhar Dhawan was caught by Murali Vijay off Mitchell Johnson.

Shikhar Dhawan could only manage a run in Match 27 of Indian Premier League (IPL) 2015 between Kings XI Punjab (KXIP) and Sunrisers Hyderabad (SRH). He was out trying to pull a short ball from Mitchell Johnson, as it flew off the edge to Murali Vijay at first slip as SRH lost their first wicket with just 10 runs on the board. Dhawan scored one off two balls. Live Updates: Kings XI Punjab vs Sunrisers Hyderabad IPL 2015 Match 27

Earlier, Kings XI Punjab won the toss and elected to bowl first, with both sides making a few changes. The young and impressive Manan Vohra got his first game for KXIP, while Rishi Dhawan made a comeback to the side. On the other hand, SRH brought in Ashish Reddy in place of KL Rahul, and surprisingly left out Dale Steyn in favour of Moises Henriques. Live Scorecard: Kings XI Punjab vs Sunrisers Hyderabad IPL 2015 Match 27 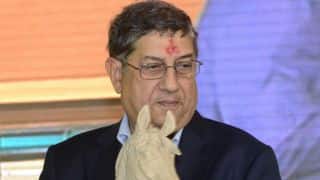