Rajasthan Royals’ bowler Dhawal Kulkarni struck in his very first over, as he removed Sunrisers Hyderabad opener Shikhar Dhawan in the Indian Premier League (IPL) 2015 Match 11 at Visakhapatnam. Smith experimented with his bowling as he brought on Kulkarni in place of Morris in the fourth over. Dhawan went down the track in the fourth over and smashed Kulkarni for a four towards deep extra cover. Dhawan scored 10 from 12 balls. Dhawan was caught by Sanju Samson, as he edged Kulkarni. Live Blog: Sunrisers Hyderabad vs Rajasthan Royals

Warner smashed Chris Morris three fours in the bowler’s first over of the match. Morris went for 13 runs in his first over. Deepak Hooda replaced Southee in the third over. After bowling two good deliveries, Hooda bowled a full toss and Dhawan punched it to for four towards mid on. He bowled well, apart from the four and a wide. Warner also overtook Royals’ skipper Smith as the most run scorer in IPL 2015. Live Scorecard: Sunrisers Hyderabad vs Rajasthan Royals

David Warner and Shikhar Dhawan opened the innings for Sunrisers Hyderabad. Tim Southee opened the bowling for Rajasthan Royals. Southee started with a short ball and Warner tried to hit it but could not make much connect. Dhawan edged one off Tim Southee on the last ball of the first over and the ball landed almost in Smith’s hand. However, the ground umpires left it on the third umpire to make the decision and it was ruled  not out. 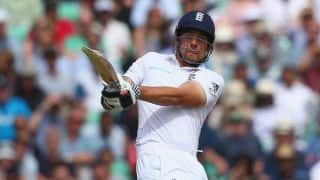