The three-match Test series will flag off in Cape Town followed by the second and third Test in Centurion and Johannesburg respectively.

India had begun their preparations for the first Test against South Africa in Cape Town well before the New Year. However, some bad hovers around the Indian squad. Ravindra Jadeja is down with viral infection for past two days. The BCCI Medical Team has been monitoring him and is also in touch with the local medical team in Cape Town. The BCCI Medical Team in consultation with the local medical team has decided that Jadeja will be taken to a hospital for treatment and expects him to fully recover in the next 48 hrs.Jadeja had a splendid home season. In the recently concluded Test series against Sri Lanka, Jadeja ended with 10 wickets from 3 matches at 25.90.

With 2 more days required for recovery, Jadeja is likely to miss the first Test. However, Shikhar Dhawan, who had injured his ankle before departing for South Africa, is fit and available for selection for the first Test. Dhawan had faced some troubles while travelling to South Africa from Emirates Airlines. The airlines had denied Dhawan’s family from boarding the flight as they did not have the birth certificates and other documents in place before departure. Dhawan had taken the matter to his Twitter account and claimed Emirates as extremely unprofessional.

The three-match Test series will flag off in Cape Town followed by the second and third Test in Centurion and Johannesburg respectively. 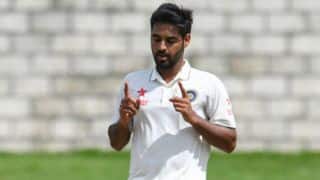