Perhaps the most striking feature of Shikhar Dhawan’s batting was the way he dealt with the short ball.

Perhaps the most striking feature of Dhawan’s batting was the way he dealt with the short ball. Bowlers have often tried to exploit his tendency to pull, but on this occasion, he was decisive and ready for the challenge. It perhaps goes back to the first game against Pakistan where he has pulled Mohammad Irfan for a six early in the innings. In this game, he dealt with the awkward bounce of Morkel by pulling him for a four. The vast expanse of the Melbourne Cricket Ground (MCG) meant that overhauling the boundaries wasn’t an easy task. Catch live cricket scorecard of India (IND) vs South Africa (SA) ICC Cricket World Cup 2015 match here

The other shot that showed that Dhawan has worked himself in good form was the way he glided a short ball from Wayne Parnell over third man. The ball was rising a touch outside the off-stump. Dhawan swayed out of the line and glided it for a four. He had also pulled one from Steyn very fine for a four. These shots signify that Dhawan has managed to watch the ball well. He had played such shots with great verve whenever he has been in great form — the ICC Champions Trophy 2013 being one in memory.  ICC Cricket World Cup 2015: POINTS TABLE

There was a touch of good fortune for Dhawan though. Hashim Amla dropped a chance at point as the ball popped out of his hand. Then, JP Duminy missed, what looked like a simple run-out chance. Dhawan carried on, holding the Indian innings together. What a turnaround it has been for the southpaw! 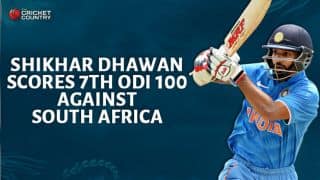