Ravindra Jadeja was part of the Virat Kohli-led India U-19 side in 2008 World Cup that they won against Sri Lanka.

Several current Indian cricketers had been part of U-19 cricket before making it in the national side. Shikhar Dhawan was the Player of the Tournament in the 2004 U-19 World Cup with tally of 505 runs at 84.16. Kuldeep Yadav bagged a hat-trick in the 2014 edition against Scotland. He now holds a hat-trick in ODIs as well, against Australia.

Virat Kohli, on the other hand, was the second Indian captain to lift the U-19 World Cup in 2008 (first time India won under Mohammad Kaif in 2000). Ravindra Jadeja too, was part of the winning side. Kohli had already asked the current U-19 Indian team to respect the opportunity that gave him the recognition at the world stage. Joining the bandwagon is Dhawan, Kuldeep and Jadeja.

Prithvi Shaw-led India will embark for the U-19 World Cup 2018 that begins from January 13 in New Zealand. India will be playing their first game against Australia. India has reached the final of the tournament five times. The last time India lifted the U-19 World Cup trophy was in 2012 under Unmukt Chand s captaincy.

This time, India would look to claim the trophy. Speaking to ICC before the tournament, Dhawan, Kuldeep and Jadeja spelled out the importance of U-19 cricket in their lives.

Shikhar Dhawan: Several Indian players have prospered through U-19 cricket

The Under-19 World Cup is a great platform for youngsters as they get an early feel of international cricket. The tournament provides players the opportunity to not just iron out their flaws but also to understand how things pan out in top tournaments. I feel this tournament has gained in importance over the years with so many players prospering after doing well in the tournament. Look around and you will see that a number of players in each international side figured in past Under-19 World Cups.

Ravindra Jadeja: 2008 U-19 World will always remain special as I played under Virat Kohli

It is a great learning ground and helps players comprehend what international cricket is all about. For me, this tournament will always remain special since I was part of the team that won it in 2008 under Virat Kohli. Virat has since gone on to become one of the best batsmen of his generation and also a successful captain.

Kuldeep Yadav: I m now with two hat-tricks one in the U-19 World Cup and one in ODI matches

Now (I also have a hat-trick) against Australia, never dreamt of taking a hat-trick against a side like Australia. I m now with two hat-tricks one in the U-19 World Cup and one in ODI matches. It s a big stage to represent your country, you will get a lot of publicity. It is obviously important to perform well in the tournament. Later on you can develop your skills for the future and to play for the senior team. Virat Kohli: I was away for something which was much more important 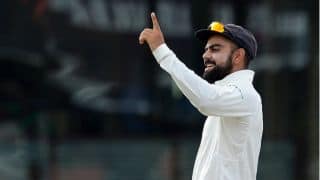