Shikhar Dhawan has been ruled out of the rest of the Sri Lankan tour with a hand injury.

Mumbai: India‘s opening batsman Shikhar Dhawan has been ruled out of the rest of the Sri Lankan tour with a hand injury, the Board of Control for Cricket in India (BCCI) said on Monday. Dhawan was steady with the bat in the first Test against the islanders in Galle where he scored a brilliant century (134) and then contributed 28 in the second innings, though in a losing cause. “The BCCI medical team has confirmed that opening batsman Mr. Shikhar Dhawan has been ruled out of the remaining part of India’s tour of Sri Lanka – 2015,” the BCCI said in a release. India pay tribute to Kumar Sangakkara’s iconic cricketing career

“Dhawan had injured his right hand during the first Test at Galle. He underwent further tests that confirmed a hairline fracture in his hand. He would require four to six weeks to recover from the injury,” the release added. The second Test will start in Colombo at the P Sara Oval from August 20, while the third is also scheduled to take place in the same city, but at the Sinhalese Sports Club Ground from August 28. The injury is likely to have an effect on the Indian batting line-up that looked fragile in the second innings of the 1st Test as they were skittled out for only 112, chasing a target of 176 runs. Poll: Do you think Stuart Binny will play the 2nd Test against Sri Lanka at Colombo? 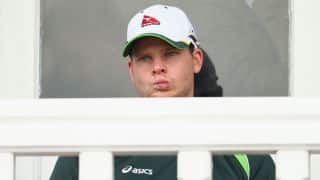 Ricky Ponting: Steven Smith should bat at no.3