Shikhar Dhawan scored the fourth century of his Test career on Day Two of the first Test against Sri Lanka at Galle. Very early in his innings Dhawan went past 1,000 Test runs, and celebrated his landmark by going on to score a high-class hundred. Dhawan played a virtually chanceless innings, using his feet well against the spinners and batting resolutely against the pacers. Earlier on Day One, Dhawan and Virat Kohli put on an unbeaten 100 for the third wicket, taking India to 128 for 2 at stumps with Dhawan unbeaten on 53 and Kohli on 45. Ravichandran Ashwin was the star of the day for India with figures of 6 for 46 as the visitors bowled out their hosts for just 183. Live Scorecard: India vs Sri Lanka 2015, 1st Test at Galle, Day 2

After India bowled Sri Lanka out for 183 at tea, KL Rahul and Dhawan made their way out to open together for the first time. It should be noted that Rahul has had a distinct lack of stability in his short career so far; he made his debut batting at No. 6, then batted at No. 3 in the second innings of the same match before opening with Murali Vijay in his next Test. He is now opening with Dhawan. He came out looking positive but was out for just 7. Dhammika Prasad managed to sneak one past his defence and trap him LBW. Rohit Sharma, promoted to No. 3, was unable to get going and was out LBW for 9. That united Kohli and Dhawan, who added an unbeaten 100 at stumps. Live Updates: India vs Sri Lanka, 1st Test at Galle, Day 2 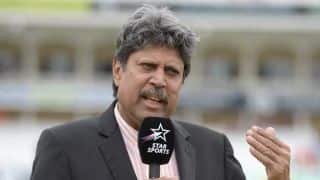