Shikhar Dhawan scored his second Test ton but New Zealand pegged back India with three key wickets in the second session on Day Four of the first Test at Auckland. India are on 270 for five needing 137 runs to win. Securing the new ball just an over before the break, Trent Boult struck with the wicket of Ajinkya Rahane.

India had already turned the heat back on to New Zealand going in to lunch at 180 for two with an unbeaten partnership of 84 between Virat Kohli and Dhawan. Moreover they had already snatched the momentum by smashing leg-spinner Ish Sodhi in the last half hour before lunch. Post the break they continued from where they left off taking on Sodhi once again. Dhawan in particular cut loose in Sodhi’s third over smashing him for a six over long-on to move upto 99 and then completed his second Test ton with a cut shot for a boundary. It was Dhawan’s first hundred since the sensational debut against Australia at Mohali in 2013. He is only the second opener to score a century overseas in the fourth innings for India.

India had already unsettled the Kiwis by increasing the scoring rate. They were almost going over six an over. The confidence and authority with which the batsmen were playing their shots could have well signalled the white flag for the Black Caps, but Kohli’s confidence did him in. He tried to fetch a ball outside off and pull it towards the the leg. And to his disappointment the delivery by Neil Wagner took the bottom edge and flew to wicketkeeper BJ Watling. The 126-run stand came to an end with India still holding the momentum as Dhawan was going strong. The wicket of a free-flowing Kohli had rejuvenated the Kiwi pace attack and they were back in their rhythm.

The run-scoring had suddenly slowed when Dhawan and Rohit Sharma were batting. The boundaries that flowed few overs before Kohli’s dismissal had dried up. But the batsmen had a sense of calm approach. However, India lost the key wicket of Dhawan when he tried to evade a nasty bouncer from Wagner and gloved it to keeper.

A confident Ajinkya Rahane along with Rohit continued India’s run-chase. With the new ball around the corner before tea, the Kiwis were eager to strike one more blow. The first ball with the new cherry by Boult swung back sharply to hit Rahane’s pads. A huge appeal ensued and Steve Davis committed a blunder by raising his finger as the ball had taken a thick inside edge off Rahane’s bat. His wicket completely changed the momentum in New Zealand’s favour. 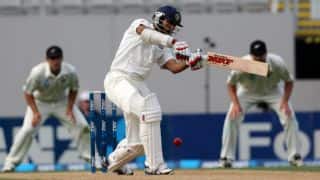