Shikhar Dhawan is the second highest-run getter in the ongoing ODIs.

While writing the fourth ODI preview, I had questioned, “Will Shikhar Dhawan get a big score in his 100th ODI?”. Turns out, Dhawan may have gone through my piece (at least I can assume so), and has made the most of his memorable ODI. Memorable, why? Dhawan, in the ongoing ODI versus South Africa, became the 34th Indian to play 100 ODIs. The occasion added much intensity to his batting, and the left-hander notched up his 13th hundred in the format.

Note: Dhawan becomes the first Indian to slam a hundred in his 100th ODI. Overall, he his the ninth player. He joins the likes of Chris Gayle, David Warner, Kumar Sangakkara, Chris Cairns, Marcus Trescothick etc.

Electing to bat, India lost Rohit Sharma early. However, Dhawan didn’t look out of sorts for a minute. He nudged the ball around, slammed the short deliveries across the ropes, and ran quickly with skipper Virat Kohli. Dhawan had scores of 35, 51* and 76 prior to this innings. He had to convert them into three figures, and Dhawan did just that with 12 boundaries. Dhawan’s innings had few blistering drives and flicks (two resulting in huge sixes).

The most impressive feature of Dhawan’s innings has been his awareness. He hasn’t looked to go for risky shots, and toyed around with the field setting. In few occasions, Dhawan has used the pace of the ball to guide them towards the fence. 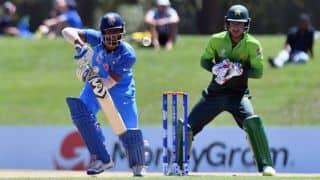 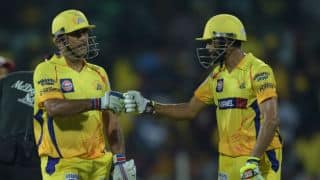