At lunch, Shikhar Dhawan was unbeaten on 110 while Virat Kohli was not out on 86.

Shikhar Dhawan and Virat Kohli continued their charge by extending their partnership to 199, taking India to 227 for 2 against Sri Lanka in the first session of Day Two of the first Test at Galle. India enjoyed a productive, wicketless session which saw 99 runs scored. Dhawan celebrated ‘International Left Hander’s Day’ by scoring his fourth Test hundred, after having gone past 1,000 runs in the longest format earlier on Day One. Kohli went to lunch just short of his 10th century, as India piled on Sri Lanka’s misery. The hosts were further hampered by the fact that their captain Angelo Mathews did not take field at all in the morning session, and were led instead by Lahiru Thirimanne. Mathews’ absence cut down on one bowling option as well. Dhammika Prasad bowled with a lot of heart but Nuwan Pradeep was largely ineffective. At lunch, Dhawan was unbeaten on 110 and Kohli was on 86. Live Updates: India vs Sri Lanka, 1st Test at Galle, Day 2

Both Dhawan and Kohli played well, but each batsman gave the odd half-chance. The closest was when Dhawan set off for a single only to be sent back by Kohli. The fielder threw to the wrong end and Dhawan survived. Kohli edged a couple that fell short or wide of the fielders, but by and large both men looked in command. The Sri Lankan spinners failed to cause any real problems. Rangana Herath bowled a decent line and length but failed to look penetrative, while Tharindu Kaushal bowled on both sides of the wicket and was taken for plenty. Live Scorecard: India vs Sri Lanka 2015, 1st Test at Galle, Day 2

Earlier, Dhawan and Kohli ensured that India ended Day One well and truly in control at 128 for 2 against Sri Lanka. Dhawan was unbeaten on 53 while Kohli was 45 not out as India trail by a mere 55 with eight wickets still in hand. Ravichandran Ashwin was the star of the day for India with figures of 6 for 46 as the visitors bowled out their hosts for just 183. Angelo Mathews (64) and Dinesh Chandimal (59) offered the only resistance for Sri Lanka. READ: Ravichandran Ashwin continues renaissance with six-wicket haul against Sri Lanka in 1st Test at Galle

After India bowled Sri Lanka out for 183 at tea, KL Rahul and Dhawan made their way out to open together for the first time. It should be noted that Rahul has had a distinct lack of stability in his short career so far; he made his debut batting at No. 6, then batted at No. 3 in the second innings of the same match before opening with Murali Vijay in his next Test. He is now opening with Dhawan. He came out looking positive but was out for just 7. Dhammika Prasad managed to sneak one past his defence and trap him LBW. Rohit Sharma, promoted to No. 3, was unable to get going and was out LBW for 9. That united Kohli and Dhawan, who added an unbeaten 100 at stumps. READ: Angelo Mathews continues to fight the lone battle for Sri Lanka 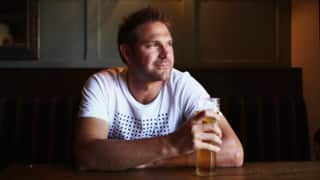