Currently, India are 84 for the loss of two wickets in 22 overs with opener Shikhar Dhawan on 36.

Indian batsmen, Shikhar Dhawan and Virat Kohli brought up the crucial 50-run stand for the third wicket, against Sri Lanka in the first of the three-match Tests series at the Galle International Stadium in Galle on Wednesday. The partnership came off 77 deliveries as Dhawan contributed 27 and Kohli contributed 20 in the stand including five extras. Currently, India are 84 for the loss of two wickets in 22 overs with opener Shikhar Dhawan on 36 and skipper, Virat Kohli on 24. Earlier, Sri Lanka had won the toss and elecyted to bat first as both the team went in with a bowling secialised team as India started off well and the strategy eventually paid off, as they claimed wickets at regular intervals. Live Scorecard: India vs Sri Lanka 2015, 1st Test at Galle, Day 1 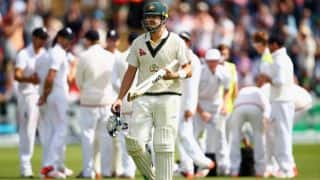