Shikhar Dhawan and Virat Kohli added 158 runs for the second wicket to set the platform.

The occasion is a big one for South Africa. Not only are they playing for survival in the six-match ODIs versus India, but it is the Pink ODI. The hosts are wearing their pink attires in a bid to create awareness for breast cancer. This has been a practice prevalent since the past few years. They haven’t lost an ODI in their pinks, hence it adds onto the pressure. Already reeling 0-3, AB de Villiers’ return surely sparked some energy in the lineup. However, Shikhar Dhawan made the most of his 100th ODI. Along with Virat Kohli (75), Dhawan compiled his 13th ton, and propelled India to 289 for 7 in the fourth ODI at Johannesburg.

Electing to bat, India got off to a poor start. Rohit Sharma failed once again. He now has his worst average as an opener (10) in a series. Kohli continued his merry run, along with Dhawan. Becoming the 34th Indian to play 100 ODIs, Dhawan looked eager to make full use of his personal milestone. He looked determined, and stitched a 158-run stand with the Indian skipper. The duo rotated the strike, and played their shots from time to time.

Dhawan punished anything offered on the pads. He even slammed two sixes off the flick. In addition, he was confident of putting anything across the fence being marginally short of length. On the other hand, Kohli was at his usual best. He rotated the strike at will, and was able to read the length of the ball quickly. Due to no frontline spinner, South Africa’s bowling attack lacked variety, and it worked in Kohli’s favour. Nonetheless, just when Dhawan was nearing three figures, the innings slowed down a bit. Due to this, Kohli took on Chris Morris, and fell for 75.

The onus fell on MS Dhoni. He didn’t have much time for the repair work, but started off cautiously. There was a massive six (towards the covers region) to get him going. He stitched a vital stand with Shreyas Iyer. Iyer, however, didn’t look much convincing. He tried to play too many strokes, and perished for 18 (21). South Africa impressed courtesy Lungi Ngidi and Kagiso Rabada’s wicket-to-wicket bowling. They were complimented by their fielders, as India struggled to up the ante.

Dhoni lost partners at regular intervals, and it prevented him to play freely. He even faced minimal balls due to lack of strike rotation. Nonetheless, few slogging in the end overs propelled India to their final score.

Trivia: Dhoni asked for a heavy bat in the 45th over. He, in turn, demanded for a heavier one in the final over. It leaked 12 runs.

Note: If you have missed out on Aiden Markram’s catch to get rid of Hardik Pandya, you are missing something! 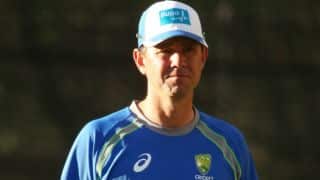