Prasad termed Virat Kohli s team as a formidable traveling side, but one with batting issues to resolve in Tests.

India s chairman of selector MSK Prasad has described the decision to drop Shikhar Dhawan from the Test squad to face West Indies as a difficult one, while expressing surprise at the batsman s failures in red-ball cricket.

In four Tests in England this summer, Dhawan did his chances of selection overseas no good with 162 runs at an average of 20.25 without a single half-century. When the squad to face West Indies for two Tests was announced last week, Dhawan s name was missing.

It is really surprising that a batsman who can rule in white-ball cricket finds it difficult to replicate the same in red-ball cricket, Prasad told The Indian Express. He is a treat to watch in any format of the game. Unfortunately, we had to take this tough decision after giving him considerable opportunities. At the same time, we can say that if Shikhar is willing to put in the hard yards required for the longer format, the gates are definitely open for him.

With Wriddhiman Saha still recovering from shoulder surgery, the wicketkeeper s slot for the West Indies Tests went to Rishabh Pant who made his debut in England and scored a century in his third Test. Prasad, a former India wicketkeeper, termed Pant s glovework behind the stumps a work in progress but put faith in the youngster with an eye on the tour of Australia in December.

“We all know what Rishabh is capable of as a batsman. He can make a very big impact at No.6 or 7 for our Test team, said Prasad, who played six Tests and 17 ODIs for India between 1998 and 2000. When it comes to wicketkeeping, he has some way to go. We are monitoring his progress in that aspect. We had requested the BCCI to get Rishabh to fine-tune his wicketkeeping skills at the NCA.

“He is now working hard there under the watchful eyes of specialist coaches like Kiran More and Abhay Sharma. We all wish that he quickly fine-tunes his skills and comes good with his wicketkeeping too. If he can do that, it will be a huge advantage for our Test team, especially while playing abroad.

India, ranked No 1 in Tests, have lost their last two Tests series overseas – to South Africa 1-2 in January and now in England 1-4. Prasad still termed Virat Kohli s team as a formidable traveling side, but one with batting issues to resolve.

I feel we have a very good Test team that can win abroad, he said. Though we lost to South Africa 2-1 and England 4-1, these results are not the true reflection of the way we fought against both sides in their respective dens. I am convinced that we have one of the best bowling attacks in the world today. The way our fast bowlers bowled in South Africa and England was really heartening. Even our spinners did a good job. Our fielding and catching has been fantastic in the England series.

“The area where we need to gel well is batting as a unit. Though our batsmen had individual successes, collectively we need to do better. The losses in Cape Town, Edgbaston and Southampton were all because we didn t put up a collective effort in the batting department while chasing reasonable targets. Of course, we also need to find solutions for getting rid of tail-enders, which is costing us in the outcome of games. 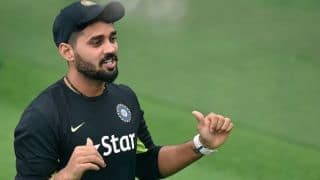