Malik was hit on his head during the 4th ODI between Pakistan and New Zealand.

During the fourth ODI between New Zealand and Pakistan, Shoaib Malik was struck on his head and showed delayed signs of concussion. Colin Munro s throw back to Henry Nicholls hit Malik on his head. However, at that point Malik continued batting and was dismissed for 6. Malik developed late concussion and was taken to the hospital. Malik was fine but did not take the field during New Zealand’s innigns. He missed the fifth ODI.

Malik had even updated his fans on Twitter about his health and mentioned it was the ball that was in critical condition. On the other hand, the political situation between India and Pakistan may be at an all-time low but cricketers from both teams have always shared a great bond. One could witness that during the 2017 Champions how Malik and Azhar Mahmood were bonding with Virat Kohli and co. during the presentation ceremony. The video was declared Best Spirit of Cricket of Video of 2017 by ICC on their Instagram account.

On Thursday, Shikhar Dhawan asked Malik about his health and Malik reassured him that all was well.

Janab @realshoaibmalik, hope you’re recovering well and will be fit soon to be back on the field! Take care

That won the hearts of many Pakistan fans.

wow..its a good to see u such a great sportsman spirit.

Thank you for the prayers.

Thanku dhawan sb for tweeting about my hero @realshoaibmalik . We all praying for him, he will be fit very soon and will be back in field in shaa allah. Thanku once again and best of luck

respect for you from

As for the results of the five-match ODI series, Pakistan were whitewashed by New Zealand on Friday. 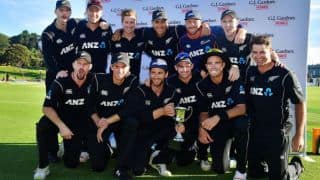 MS Dhoni: Chennai Super King will aim to get Ravichandran Ashwin back for IPL 2018