Shivnarine Chanderpaul remained unbeaten on 156 and Denesh Ramdin scored 84 not out as the West Indies reached 437 for four at lunch on the second day of the opening Test against Bangladesh on Wednesday. 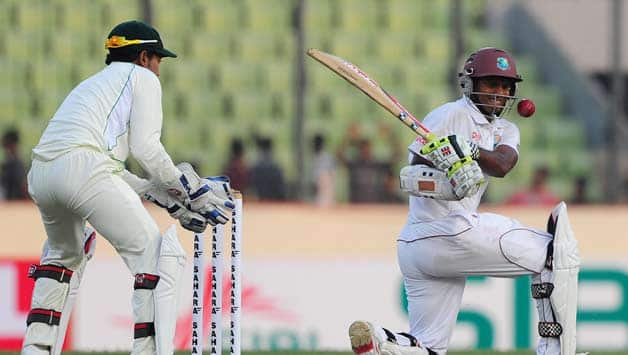 Shivnarine Chanderpaul and Denesh Ramdin frustrated Bangladesh as they took the West Indies to an imposing score of 437-4 at lunch on the second day of the first Test on Wednesday.

Debutant off-spinner Sohag Gazi, who took three wickets on the first day, opened the bowling and kept a tight line and length. He forced an edge off Chanderpaul’s bat which fell short of first slip and went for two runs.

The experienced left-hander then hit paceman Shahadat Hossain to the third-man boundary to reach his 150. He has so far hit 19 fours during his 282-ball stay at the crease.

Ramdin, 52 overnight, looked unperturbed in the company of his illustrious partner, helping take the West Indies to a score which will be a daunting prospect for the vulnerable Bangladeshi batting line-up.

Ramdin has hit eight boundaries during his 170-ball knock.

Ashok Dinda called in as cover for Ishant Sharma

Motera not a happy hunting ground for India