West Indies most experienced player Shivnarine Chanderpaul dismissed for just one by Ben Stokes caught by Moeen Ali at backward point. Chanderpaul chased a full ball outside off and the ball went in the air and Moeen, who was positioned at backward point completed a simple catch. England captain Alastair Cook will be delighted as he made the bowling change and Stokes, who was bowling his first over, rewarded his captain immediately. LIVE BLOG: West Indies vs England

West Indies will be gutted with it as they lost Darren Bravo just a few minutes before. They would have wanted Chanderpaul to build a good partnership along with Marlon Samuels. England, on the other hand, will look to pick up a few more wickets before the tea interval. LIVE SCORECARD: West Indies vs England

Earlier England had won the toss and elected to bowl first. Moeen Ali comes in place of James Tredwell in the match. Devendra Bishoo and Shannon Gabriel are the two new players in the West Indies’ batting line-up for the match. West Indies vs England 2015, Free Live Cricket Streaming Online on Ten Sports: 2nd Test at Grenada Day 1 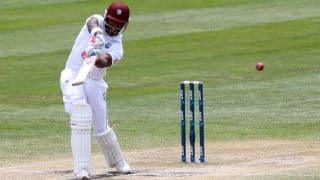 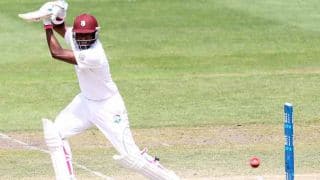