Rahul Dravid termed Shivnarine Chanderpaul's style of batting as a distinctly different from his peers.

“You only have to look at his numbers — the sheer weight of them over the length of his career — which is not a short one. He’s been consistent, exceptional in all conditions,” Dravid was quoted as saying in ‘Modern Masters’, a video series by ESPN Cricinfo.

Dravid termed Chanderpaul’s style of batting as a distinctly different from his peers.

“One of the things you probably forget about him is the sense of the style and the way he plays. He’s not really played in a strong team. He’s played in an era when West Indian cricket hasn’t been at its best so they haven’t had a lot of success as a team. A lot of his runs has been scored when West Indies have lost.”

Dravid said that Chanderpaul was a class act while handling India’s famed spin twins Harbhajan Singh and Anil Kumble at their best.

“The way he’s able to manoeuvre balls of spinners into gaps was something that stood out. Standing in slips, you’ll be able to see that Chanderpaul is able to turn his wrists at the last minute to people like Harbhajan Singh and Anil Kumble and just find the gap when he needed to,” said Dravid. 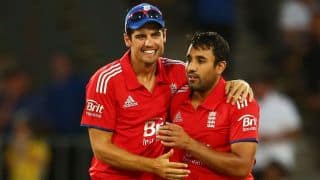