Veteran West Indies left-handed batsman Shivnarine Chanderpaul will line up for St. Kitts in their three-day match against Bangladesh as he grabs vital match practice ahead of the two-Test series starting September 5. The 40-year-old was named by the St. Kitts and Nevis Cricket Association in a 13-man squad Friday for the tour match which starts Saturday at Warner Park, reports CMC.

Chanderpaul, who has played 156 Tests, did not feature in the preceding one-day series which the Windies swept 3-0. The tour match, therefore, represents his only chance for time in the middle before the first Test starts at Arnos Vale in St. Vincent.

Chanderpaul has been in decent form this year averaging 48 in three Tests against New Zealand back in June and averaging nearly 50 in seven matches for Derbyshire in the English County Championship.

Currently, Chanderpaul trails only Brian Lara for the most career Test runs for West Indies with 11,414 runs, at an average of 51.88 per innings, including 29 centuries. The St. Kitts squad for the tour game will be led by all-rounder Jacques Taylor. 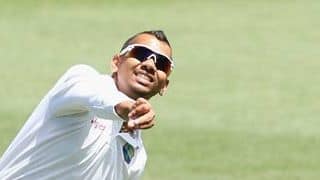