Guyana sports minister said Shivnarine Chanderpaul should be given a respectable send off.

Georgetown (Guyana): Guyana Sports Minister Rupert Roopnaraine, describing the axing of cricketer Shivnarine Chanderpaul from the West Indies squad for the series against Australia as “distressing”, has said the veteran left-hander should have been allowed to leave “in a dignified way”. Roopnaraine said the way Chanderpaul had been treated did not reflect the yeoman service he had given to West Indies cricket, reports CMC. ALSO READ: Michael Holding backs Clive Lloyd’s decision to sack Shivnarine Chanderpaul

“The manner of his going, really does no justice to the manner of his performance over the years and what he has meant to us. The response of the Guyana Cricket Board (GCB) was heartedly robust. It clearly is a decision that we in Guyana feel distressed about. Chanderpaul has for so long been a titan on the cricketing scene in the Caribbean and it is difficult right now to even imagine a West Indian team without Chanderpaul,” Roopnaraine said on Thursday.

The GCB on Monday lambasted the selectors’ decision to discard Chanderpaul, calling it a “matter of gross disrespect”. Chairman of selectors Clive Lloyd, along with new head coach Phil Simmons, had said on Sunday that Chanderpaul had been omitted because of his “rapid decline” in form.

Chanderpaul, who boasts a career average of 51, has averaged just 16 from his last 11 innings. Overall, however, he has scored 11,867 from 164 Tests, with 30 hundreds. His last triple figure score came last September against Bangladesh when he plundered 270 runs in the two-Test series without being dismissed.

Roopnaraine criticised the planning of selectors, contending that if they believed Chanderpaul was coming to the end of his career, then appropriate arrangements should have been put in place for his farewell.

“If you identify, if you say look, ‘Tiger has had a great run, we are going to miss him, but we know he has to go’, let him leave in a dignified way, make a good preparation for what should have been his final match so that the West Indian people would have had a chance to salute him in a final farewell,” Roopnaraine argued.

“We needed to design something very appropriate, when someone of Chanderpaul’s value leaves the scene. That was not done and that is what has been most distressing.” Chanderpaul is just 87 runs short of overtaking Brian Lara as the leading West Indies run-scorer of all time. And while Roopnaraine said this was not a valid enough reason to pick the player, he believes the non-selection was badly handled.

“You want to pick your best team to play against Australia, and beat them if you can. At the moment on his current form, he doesn’t make it, but my own feeling is that he should have been sent off on the twilight really in a far more dignified way that pays tribute to what he has contributed,” Roopnaraine said. “What he has contributed has just been gigantic and that should have been acknowledged, recognised and dealt with appropriately.” 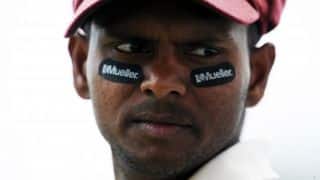