Shoaib Akhtar is part of Sachin Tendulkar's team in Cricket All Stars 2015, which will be played in the United States.

New York: Former Pakistani fast bowler Shoaib Akhtar has expressed optimism that India and Pakistan will play a cricket series this year as he hoped an improvement in relations between the two countries. “There have been ups and down in relations between India and Pakistan. It has been a roller-coaster,” Akhtar told PTI.  Akhtar voiced optimism that the proposed bilateral series between India and Pakistan in UAE next month will take place as planned. Akhtar said “eventually we will come to the point when we will sit together, put our hands together and work things out. “Insha Allah yeh series hogi [this series will happen]. I am sure Pakistan and India will play this year,” he said. VIDEO: Shoaib Akhtar wishes to play for Sachin Tendulkar’s team in Cricket All Stars League

“I feel that the two great nations sit together, circumstances and situations improve and the next 70 years should be prosperous than how it has been so far,” he added. Akhtar said Indians and Pakistanis have great adulation for cricketers from each other’s nations, adding that he has a huge fan following in India and Pakistanis also admire Tendulkar, Sourav Ganguly and Mahendra Singh Dhoni. READ: ICC World Cup 2003: Shoaib Akhtar breaks 100-mph barrier

“They are not just Indians’ heroes but they are a Pakistani’s heroes also. There is so much adulation for both nations,” he said. Tendulkar had earlier this week said that it’s upto the governments of the two nations to decide whether India and Pakistan should play against each other. READ: ICC World Cup 1999 semi-final: New Zealand find Shoaib Akhtar too hot to handle

“Also I think that the relations [between India and Pakistan] need to improve. If the governments feel that this (cricket) is the ideal way to move forward and the [cricket] Boards [feel so], I do not see any reason why we should not play,” Tendulkar had said. 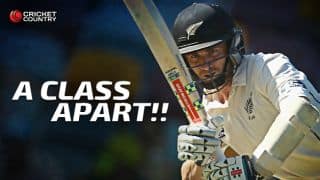