Shoaib Akhtar: India should not play Pakistan until border unrest settles down

Shoaib Akhtar: India should not play Pakistan until border unrest settles down

A series between the two neighbouring countries is due to be held in the UAE in December.

Dubai: Pakistan shouldn’t play any bilateral cricket series with India until the long standing border unrest between the two countries is settled, former pacer Shoaib Akhtar has said. A series between the two neighbouring countries is due to be held in the United Arab Emirates (UAE) in December. The UAE is scheduled to host three Tests, five One Day Internationals (ODIs) and two Twenty20 matches this December. However, the fate of the series is now uncertain as talks between the two countries on contentious issues have stalled. The situation became even more tense with the intensification of cross border firing. Sanjay Bangar calls Indian batsmen’s versatility a positive sign

Akhtar said these pressing problems should be addressed first, which is why the series should be called off. The two countries haven’t faced each other in a bilateral series since 2007. “Everybody knows to keep politics separate from sport,” he was quoted as saying by gulfnews.com on Thursday. Pakistan can ‘survive’ without playing India, says PCB chairman

“But unfortunately there’s a lot of unrest on the borders and it’s not right to play such a Test between the two countries at this time. However, I would encourage that, whenever the unrest settles and whenever India and Pakistan are ready to talk again at the highest level, cricket would be the perfect way to bridge relations.” BCCI members adjourn working committee meeting due to N. Srinivasan’s presence

“They are still two of the best teams in the world and neither can avoid each other if you want to keep cricket interesting. You cannot ignore that the rarest of talent comes out of these countries and that people love to see them play against each other,” he added. The series hasn’t officially been called off, but its fate has become very doubtful considering the escalating tension between the two countries. POLL: Who is your favourite Indian commentator? 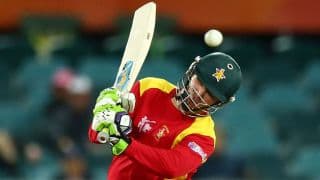