The trio is indebted to Pakistan till the moment they retire, Shoaib Akhtar said.

Shoaib Akhtar extended support towards the trio— Salman Butt, Muhammad Asif and Muhammad Aamer—when he said Pakistan will definitely forgive them if the three win the country the upcoming ICC World T20 2016, that is being hosted by the neighbouring country, India. The former cricketer raised his voice with a very firm opinion as he said that “he doesn’t see why the cricketers should not get a chance to redeem themselves.” The ICC event, that features a total of 16 countries, will commence in March 11. READ: Shoaib Akhtar: India should not play Pakistan until border unrest settles down

According to a report from Tribune.com.pk, Akthar said: “People deserve a second chance and, as a human, I don’t want to give up on another human being. They have made a mistake and have served their sentence so I can forgive them. I hope they have learnt their lesson, and now I really want them to go out there and prove once again that they are good people.”

They are indebted to Pakistan and every day they play for their country they will carry that burden until the minute they retire. They have done something wrong, very wrong, but now to wash that one off they will go out and play at their optimum and bring glory back to Pakistan. That way people will forgive and forget,” he added.

“The perfect apology for me would be if they went on and won the T20 World Cup. If they want to apologise don’t say it verbally, bring the World Cup back from India, or perform at the best of your ability and bring laurels back to Pakistan, and we will forgive you,” the 40-year-old said.
The trio, who were found guilty of spot fixing in 2010 that was followed by them receiving a five-year ban from the sport and various prison sentences, has been given green signal to play club cricket for now. However, the International Cricket Council (ICC) had indicated that the cricketers might be allowed to represent Pakistan after February 28 after having completed the six-month rehabilitation program. READ: Rahul Dravid was my biggest nightmare, says Shoaib Akhtar

The former fast bowler showed his belief in the trio as he said Asif has a good three years left in him, Amir could have got to 250 or 300 wickets if it wasn’t for the ban. “I really want him to grow up, mature and get serious help, get a serious shrink, and serious advisors, and go out to perform to the best of his ability,” he signed off. 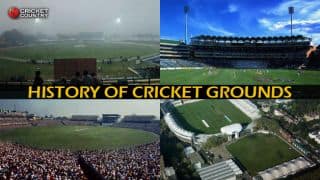