Shoaib Akhtar: Virat Kohli is the best finisher of the game

Shoaib Akhtar: Virat Kohli is the best finisher of the game

Kohli formed a successful 61 run partnership with Yuvraj Singh, which paved the way for India's victory

Shoaib Akhtar has lavished praise on Virat Kohli, calling him the best finisher of the game, as the Indian stalwart steered his side to a six wicket win over Pakistan in ICC World T20 2016 at Eden Gardens, Kolkata. Kohli scored an unbeaten 37 ball 55 under immense pressure to guide India to their first win this year’s tournament. His knock came at a crucial time, as India were struggling at 23/3 after 5 overs. His batting today was reminiscent to his knock of 49 in the Asia Cup 2016, when India were in similar situation. And Akhtar, who has never failed to express his admiration for Kohli, tweeted:

Virat is the best finisher of the game I ever seen in last 20 year of my career..but Pak team tried their best but just couldn’t finish it

The best part about Kohli’s batting was his constant running between the wickets. In early part of his innings, he kept on taking singles and doubles in order to keep the scoreboard ticking. He was very well supported by Yuvraj Singh, with whom Kohli formed a 61 run partnership, which paved the way for India’s victory. Kohli’s understanding of the game was also at view. He constructed his innings into two halves, in which the first half he kept on ticking the ball for one’s and two’s, and in the second half he took on the bowlers and scored boundaries. Kohli’s record during India’s victorious chases is inhuman, with him averaging above 100. Full Scorecard: India vs Pakistan, 19th T20 Match, Super 10 Group 2

Earlier, Pakistan were put into bat by MS Dhoni and Afridi’s side struggled their way to 118 in 18 overs. The pitch was a turner and batsmen were struggling to time the ball. A late flourish from Umar Akmal and Shoaib Malik helped Pakistan reach a par score. In their reply, Indian top order again failed to get runs on the board, and the hosts were found wanting at 23/3 after 5 overs. But Kohli and Yuvraj batted beautifully to form a 61 run partnership and take India out of a tough situation. Yuvraj was caught in the deep for 24, but the damage was done by then, with India requiring 35 runs at run a ball in 6 overs. Dhoni and Kohli ensured the hosts won the match with 13 balls to spare. 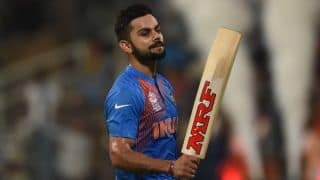 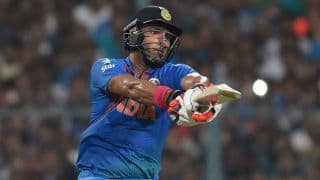 Yuvraj Singh, MS Dhoni should bat ahead of Suresh Raina for remainder of T20 World Cup 2016