Shoaib Akhtar, the former Pakistan fast bowler, has lost his father on Thursday. The fast bowler is currently in India serving broadcaster Star Sports as an analyst and commentator for the Hindi channel.

The 46-Test old Pakistan fast bowler from Rawalpindi announced his retirement in the 2011 World Cup. Akhtar is widely regarded to be the fastest bowler win the world, having registered bowling speeds of 161.3 and 160 kilometres per hour. He has been involved in controversies in his career, a theme his autobiography picked up in its name when it released in 2011, ‘Controversially Yours’. 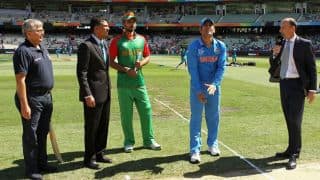 Will India vs Bangladesh 2015, 1st ODI be affected by rain?