The middle order fought back to give Pakistan the edge.

Twin crucial knocks of 35 and 33 from Shoaib Malik and Mohammad Rizwan, respectively helped Pakistan reach a competitive total of 136 against minnows Zimbabwe in the first of the two-match T20I series at the Harare Sports Club in Harae on Sunday. Although Pakistan were off to a shaky start, owing to Chamu Chibhabha’s deadly oprning spell, the middle order fought back to give Pakistan the edge. Earlier, Pakistan skipper, Shahid Afridi won the toss and elected to bat first on a typical African wicket that looked completely like a batting track and promised runs. Pakistan’s left-arm seamer, Imran Khan Jr. made his T20I debut, while Mohammad Hafeez was the surprise axe from the squad. LIVE SCORECARD: Zimbabwe vs Pakistan 2015, 1st T20I at Harare

The match began on a shaky note for Pakistan as with just 21 runs on the board in the fourth over, it was the openers in the form of Ahmed Shehzad and Mukhtar Ahmed who fell for mere 17 and four to fast-bowler, Chamu Chibhaha. With two dismissals in the same over, Pakkistan were put into pressure stareight on. Chibhaha was back in the sixth over to give Zimbabwe the third breakthrough in the form of Sohaib Maqsood, who was bowled for mere six, as Pakistan finished the six over mandatory powerplay for just 33 runs and losing three wickets in the process. LIVE UPDATES: Zimbabwe vs Pakistan 2015, 1st T20I at Harare

However, it was then that things started to look good for Pakistan as it followed a healthy 42-run stand for the fourth wicket between Umar Akmal and Shoaib Malik. It was onbly in the 12th over, when Akmal was dismissed for mere 14 by Graeme Cremer, as the score read 71. With 16 more added to the totalMalik too fell for a healthy 35 to Sean Williams, who bowled him up at the score of 87 in the 15th over.

Nevertheless, it was the fresh pair of Mohammad Rizwan and Imad Wasim, who put up the all-important and crucial partnership of 46 runs for the sixth wicket, and it was not until the 19th over, when Wasim fell for 19 to Luke Jongwe, who made him caught off Craig Ervine, as the score read 133. Next to depart was the skipper, Afridi, who could only manage a couple before being caught excellently by Chibabha at deep mid-wicket, and was followed by Wahab Riaz, who was run out for duck, as Pakistan finished their innings on 136 for the loss of eight wickets. 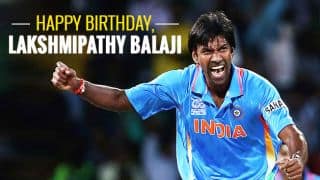 Lakshmipathy Balaji: 10 interesting facts about the speedster whose career was hampered with incessant injuries