The Pakistan cricket Board had to step in to avoid a big confusion over the selection of former captain Shoaib Malik in the Pakistan squad for the one-day series against England after captain Misbah-ul-Haq insisted on wanting Malik in the side. 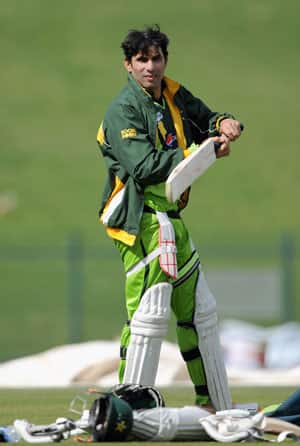 According to media sources, Pakistan captain Misbah ul Haq was upset as all-rounder Shoaib Malik was included in Pakistan squad even after chief selector Mohammad Illyas’ had assurance that Malik would be in the side Getty Images

The Pakistan cricket Board had to step in to avoid a big confusion over the selection of former captain Shoaib Malik in the Pakistan squad for the one-day series against England after captain Misbah-ul-Haq insisted on wanting Malik in the side.

Well-placed sources in the board told PTI that the PCB had to accept Misbah’s request as the chief selector Mohammad Illyas had committed to including Malik in the side when he went to Dubai to meet with the captain and coach to discuss the squad for the one-day series.

“Yes Misbah was very upset after Malik was not initially named in the squad. He than spoke to the board Chairman Zaka Ashraf, who had to step in and have the allrounder included in the side later in the evening,” one source said.

He said Misbah was upset since chief selector Illyas had assured him that Malik would be in the side when they met in Dubai.

“Misbah during his meeting with Illyas had told him he wanted Malik in the side as he felt the experienced allrounder could play a important role in the one-day series and in future matches,” the source said.

“Misbah made it clear he had lot of faith in Malik’s ability and the selectors and board should trust him on this one.

“Illyas agreed to Misbah’s request but when he returned to Lahore and the selectors met to name the squad and also reviewed Malik’s performances in the last few matches they felt there was no justification to including him in the squad,” another source said.

He said the PCB also agreed with the selectors but were not aware about the discussion that had taken place between Illyas and Misbah.

The source said after the squad was announced Misbah got pretty upset and called up the chief selector and board offices to find out what had happened.

“Misbah was not happy with the situation and after he explained the whole situation to the board Chairman he agreed to allow Malik’s late inclusion in the team,” the source said.

Interestingly, no one is aware why Misbah is supporting Malik so strongly although it is worth noting that Misbah’s second comeback to international cricket came in 2007 when Malik was captain.

Sources say Misbah is so adamant on playing Malik in the one-day series that he is even planning to use Umar Akmal as a wicketkeeper in the T20 series instead of Adnan Akmal to find a spot for Malik in the playing eleven. (PTI)