Shoaib Malik's unbeaten 101 propelled Pakistan to an emphatic six-wicket win over West Indies in the third and final ODI at Guyana.

Veteran batsman Shoaib Malik struck a classy and unbeaten century that propelled Pakistan to an emphatic six-wicket win over West Indies in the third and final One-Day International (ODI) at the Providence Stadium in Guyana on Tuesday. With this win, Pakistan also registered a 2-1 series win over the West Indies, as it was also their last ODI series before the ICC Champions Trophy 2017 at England in June. As for West Indies, it was tough luck for them with the ball, while Shannon Gabriel could only manage a couple of wickets in the innings. FULL CRICKET SCORECARD: Pakistan vs West Indies 2017, 3rd ODI at Guyana

Earlier, West Indies skipper Jason Holder won the toss and elected to bat first on a slow Guyana track, as they posted an average total of 233 for 9 in 50 overs, courtesy of Shai Hope’s 71 and Jason Mohammed’s 59. Mohammad Aamer, Junaid Khan and Shadab Khan claimed a couple of wickets each. As for their chase, Pakistan were off to a shaky start, when they lost Kamran Akmal for an unfortunate duck off the very first ball by Shannon Gabriel. And with just 16 runs on the board, it was fellow opener Ahmed Shehzad, who too fell for mere 3 to Holder in the sixth over.

Pakistan’s wobbly start continued, when they lost the star from 2nd ODI, Babar Azam for just 16 to Gabriel again in the ninth over. At the end of the first powerplay, Pakistan just managed to score 45 runs. However, the incoming new pair of Hafeez and Malik made the tough target look achievable, as they played smart cricket. Firstly they helped Pakistan bring up their 50 runs within 12 overs. FULL CRICKET UPDATES: Pakistan vs West Indies 2017, 3rd ODI at Guyana

The pair brought up their 50-run stand in the process, while within 22 overs, Pakistan also reached their 100 runs. Meanwhile, it was Hafeez, who brought up his 31st ODI half-century in 58 balls, including six boundaries. Also, Malik survived a leg-before scare in the 24th over, initially turned down by the umpire, West Indies went for the review, where the decision was once again upheld by the on-field umpire.

During this process, the pair also brought up their 100-run stand for the fourth wicket. It was at the score of 149, when the exquisite 113-run stand between the pair came to an end, after Hafeez fell for 81 to Ashley Nurse in the 30th over. Nevertheless, out came Sarfraz Ahmed, as Pakistan went past their 150-run mark in the process.

Meanwhile, Malik scored his 40th ODI half-century off 68 deliveries, including five boundaries. In the process, west indies got extremely depserate for some wickets, as the spinners along with the pacers were trying hard, but Hafeez had already done the damage, while Malik kept tightening the screws. Pakistan continued their domination, as they also managed to reach the 200-run mark within 40 overs.

At the end of the second powerplay, Pakistan managed to post 162 runs. Nevertheless, the pair of Malik and Sarfraz too made sure that they don’t give up easily, as they frustrated the West Indies bowlers again with another 50-run stand for the fifth wicket. West Indies failed to get any further wickets from hereon, as it also was too late for them.

It was Malik who hit the winning runs with a six, eventually bringing up his ninth ODI century off 111 deliveries, including 10 boundaries and a six, along with a strike rate of 91, thus allowing Pakistan to register an emphatic six-wicket win. As for West Indies, only Gabriel managed to claim a couple of wickets for 60. 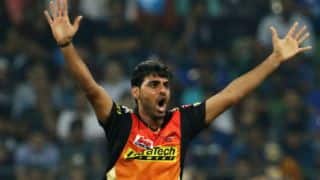