Should Ravindra Jadeja Bat Ahead of MS Dhoni For CSK? Sanjay Manjrekar Makes Big Comment Ahead of IPL 2021 UAE Opener

Should Ravindra Jadeja Bat Ahead of MS Dhoni For CSK? Sanjay Manjrekar Makes Big Comment Ahead of IPL 2021

CSK vs MI, IPL 2021: Manjrekar reckons CSK would benefit if Jadeja was ahead of Dhoni.

Dubai: Chennai Super Kings take on defending champions Mumbai Indians on Sunday in Dubai in match No 30. On the eve of the match, former India cricketer Sanjay Manjrekar has made a big statement on CSK skipper MS Dhoni and allrounder Ravindra Jadeja’s batting spots in the side. Manjrekar reckons CSK would benefit if Jadeja was ahead of Dhoni.

Speaking to ESPNcricinfo, here is what Sanjay Manjrekar had to say about CSK: “Jadeja should bat ahead of MS Dhoni. I think so (CSK will do well) because their approach has changed and Moeen Ali and Sam Curran have become impact players so they should perform better than the last time we saw them in UAE.”

Usually, Dhoni comes in ahead of Jadeja, but it would be interesting if CSK adopt this idea.

Manjrekar also suggested that CSK play Australian fast-bowler, Josh Hazlewood. “I think Moeen Ali, they should get both their fast bowlers in Hazlewood and Lungi Ngidi. And if there is a little bit of turn, Imran Tahir,” Manjrekar said.

While CSK is second on the points table with five wins from seven matches 10 points MI is fourth with four wins eight points from seven games. Both sides would like to start the UAE leg with a win. In the first phase in India earlier in the year, Mumbai beat Chennai convincingly by four wickets. 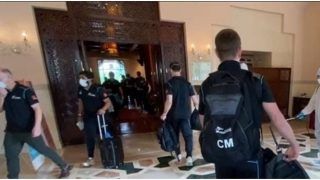