Shaw has been compared to likes Sachin Tendulkar and Virender Sehwag, after his first Test exploits, but Kohli also said the youngster should not be put in a space where he feels pressure of any kind.

Indian skipper Virat Kohli warned against comparing teenager Prithvi Shaw with anyone after the Mumbaikar made his mark at the big stage with a debut hundred against West Indies in the 1st Test. Shaw has been compared to likes Sachin Tendulkar and Virender Sehwag, after his first Test exploits, but Kohli also said the youngster should not be put in a space where he feels pressure of any kind.

We shouldn’t compare him (Shaw) to anyone yet, said Kohli during the pre-match press conference ahead of the 2nd Test against West Indies in Hyderabad, adding, We shouldn’t put him in a space where he feels pressure of any kind and he should be left in a space where he enjoys his cricket and slowly grow into a player we all believe in.

Shaw, who scored hundreds on Ranji and Duleep Trophy debuts, played his first Test in Rajkot and scored 134 off 154, hitting 19 fours. He became the youngest from India to score a century on Test debut.

I don’t think he (Shaw) should be rushed into anything yet. Because you need to give a youngster a space to grow in his own abilities. This guy is supremely talented and he has got great ability as everyone saw. We definitely think he has it in him to play at the highest level and he can repeat what he did in the first game. He is a very keen learner and he is a sharp guy. He understands situations well. We are all very happy for him, said the 29-year-old.

On the other hand, praises continue to shower in for Shaw. Former Zimbabwe captain Alistair Campbell praised Shaw for his superlative century on Test debut saying he exhibits the mental toughness that belies his young age.

Batting legend VVS Laxman had too pointed out the maturity that 18-year-old Shaw showed in his first international match saying, That he understands his game so well at such a tender age, and is also mature way beyond his years, indicate that he one for the long haul.

After the conference, India announced an unchanged 12-man squad as it had done for the Rajkot game. Uncapped pace bowler Shardul Thakur is the 12th man listed, which means that there will be no debut for Mayank Agarwal or Mohammed Siraj or a look-in for Hanuma Vihari. 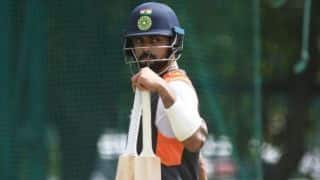