Mumbai's Shreyas Iyer has been called in as cover for Virat Kolhi or the fourth and final Test between India and Australia to be played at Himachal Pradesh Cricket Association Ground, Dharamsala.

Mumbai’s Shreyas Iyer has been called in for the fourth and final Test between India and Australia to be played at Himachal Pradesh Cricket Association Ground, Dharamsala. The young batsman has been brought in as cover for India captain Virat Kohli, who picked up an injury while fielding in the third Test at Ranchi. While he opted out of fielding in the first innings, he batted just to score 6 runs. However, there is no concrete news on Kohli being completely fit to play in the crucial final fixture. Reports suggest that Iyer will join Indian team at Dharamsala on Friday. Live cricket score: India vs Australia, 4th Test

An insider from Board of Control for Cricket in India (BCCI) revealed to EspnCricinfo, “It made sense to have a back-up batsman because in case of a contingency it is very difficult to reach a place like Dharamsala. We will know more on Virat tomorrow.” Iyer has impressed one and all with his technically sound batting. Among his recent knocks is a double-hundred scored for India A against Australia in the practice match of this series. He had also scored a century for India A in the practice match against Bangladesh, which marks his consistency in the longest format.

The series is squared so far, with Australia and India winning the first two Tests respectively and the third Test ending up in a draw. The final Test will be the decider and, if picked, Iyer will find a big platform to showcase his talent. However, India will not want to miss out on their skipper Kohli in a crucial match as this, which starts on Saturday. 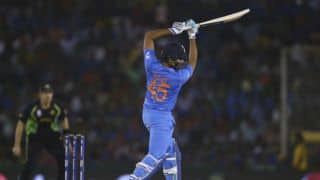