Yuvraj brought all his experience into play, realising early that this was not a pitch on which quick runs could be scored.

Shreyas Iyer and Yuvraj Singh took Delhi Daredevils (DD) to a convincing six-wicket win against Chennai Super Kings (CSK) in Match 49 of Indian Premier League (IPL) 2015 at Raipur on Tuesday. Shreyas continued to make a mark in IPL 2015, crossing 400 runs in the tournament in the process. There was no change in the points table, as CSK remain at the top despite the loss, and DD remain seventh. Scorecard: Delhi Daredevils (DD) vs Chennai Super Kings (CSK), IPL 2015 Match 49

Ishwar Pandey provided CSK with some early hope, getting Quinton de Kock to top-edge to Ravichandran Ashwin at long leg for three off seven balls. JP Duminy was the next to go, playing on to one from Ishwar for six off seven balls. It would be CSK’s last breakthrough for some time, as Yuvraj and Shreyas then combined to take the game away from CSK. Updates: Delhi Daredevils (DD) vs Chennai Super Kings (CSK), IPL 2015 Match 49

Yuvraj brought all his experience into play, realising early that this was not a pitch on which quick runs could be scored. He remained calm, and took calculated risks to hit four boundaries and a six. Shreyas, meanwhile, was in glorious form. He was fast on his feet against the spinners, rarely took an undue risk, and played some brave shots. IPL 2015 Highest wicket-taker: List of best bowlers in IPL 8

The duo added 69 — a match-winning stand in the context of the small chase — before Yuvraj holed out to Mohit Sharma off Pawan Negi. He scored a composed 32 off 28 balls. Albie Morkel hit a six but was out off the next ball. Shreyas ensured that DD pulled off the win though with a terrific 70 not out off 49 balls with 10 fours and one six. IPL 2015 Highest run-scorer: List of best batsmen in IPL 8

Earlier, CSK huffed and puffed their way to a moderate total against DD. Faf du Plessis and MS Dhoni scored a few valuable runs at the end, but a spectacular spell from Zaheer Khan that saw him take two for nine in four overs, and probing bowling from the other DD bowlers prevented CSK from cutting loose. IPL 2015 Most 6s and 4s: List of most dangerous batsmen in IPL 8

Dwayne Smith and Brendon McCullum were a far cry from their usual dominating selves, putting on a mere 16 in as many as six overs before McCullum scooped one from the impressive Zaheer to JP Duminy at mid off. McCullum’s agonising 11 came off 21 balls with a single boundary. Smith did not do much better, getting 18 off 24 deliveries with two fours and a six. He was rapped plumb in front by Albie Morkel. IPL 2015 Leading fielders: List of Best fielders in IPL 8

Suresh Raina came out looking positive, but his innings was nipped before it could cause DD any real trouble. Raina was unable to keep his drive down, and ended up hitting one from Jayant Yadav to Duminy at short cover. He scored 11 off eight balls with one boundary. His wicket united Faf du Plessis and MS Dhoni. IPL 2015 Points Table & Team Standings

The two batsmen were the most fluent ones on the day, though neither was able to reach 30. While du Plessis made a 23-ball 29, Dhoni’s 27 came off 24 balls. Morkel got du Plessis to play on after hitting three boundaries. Zaheer then came back and bowled a skilful penultimate over, accounting for Dhoni and giving nothing away. Indian Premier League (IPL) 2015: Complete coverage

Ravindra Jadeja and Pawan Negi were unable to find the middle of the bat at the end, as CSK were restricted to a nothing total. Given how DD have batted so far in the tournament, CSK will feel they have a slight hope. IPL 2015 schedule: IPL 8 match time table with venue details 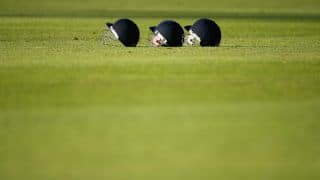 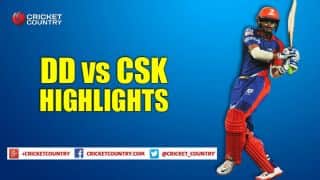