Unmukt Chand and Lendl Simmons have got Mumbai back on track against Royal Challengers Bangalore in Match 16 of IPL 2015.

Mumbai Indians (MI) are now steady against Royal Challengers Bangalore (RCB) in Match 16 of the Indian Premier League (IPL) 2015 at Bangalore. They are 83 for one at the end of ten overs. Unmukt Chand and Lendl Simmons are up and running. Chand has been particularly impressive.

David Wiese dismissed Parthiv Patel as the later was just starting to free up in company of Simmons. Simmons got off the blocks very early hitting a couple of boundaries. This is also the 100th IPL match of Harbhajan Singh and he will hope to do well and help his team win their first game in IPL 2015. LIVE UPDATES: Royal Challengers Bangalore vs Mumbai Indians 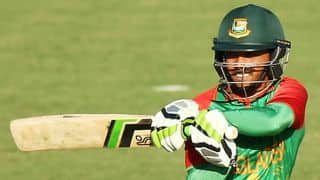