Glamorgan fast bowler Simon Jones, one of the stars of England's 2005 Ashes triumph, announced his retirement from First-Class cricket on Thursday. Glamorgan fast bowler Simon Jones, one of the stars of England‘s 2005 Ashes triumph, announced his retirement from First-Class cricket on Thursday.

The 34-year-old Welshman’s contract with county side Glamorgan expires at the end of the current season, but he intends to make himself available to play Twenty20 cricket.

“My current contract with Glamorgan finishes at the end of the season, so it’s given me a chance to reflect on what I do next,” Jones said.

“I missed some games early season, so to come back in and be part of getting the team to Lord’s (for the domestic 40-over championship final) has left me hungry to continue playing.

“The Yorkshire Bank 40 final is a fitting opportunity to stop playing the longer forms of the game and concentrate on T20 cricket, where I know I can still be at my explosive best.”

Jones is the last of the five bowlers from England’s 2005 series win over Australia on home soil to still be playing county cricket on a regular basis.

Matthew Hoggard announced his retirement on Wednesday, Andrew Flintoff retired in 2009, spinner Ashley Giles is now England’s limited-overs coach, and while Steve Harmison is still on Durham’s books, he has not played senior cricket this season.

Injury curtailed Jones’s involvement in the 2005 Ashes, forcing him out of the fifth Test. He never played for England again and spells with Hampshire, Worcestershire and Glamorgan were also hampered by injury problems.

“Simon has shown great character and determination to keep pushing himself despite his time out of the game at Glamorgan,” said Glamorgan head of elite performance Matthew Mott.

“We wish him well in his endeavours to concentrate on T20 and thank him for his contribution both on and off the field.” 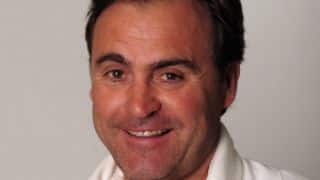