"They are all good young lads, unfortunately they made a bad mistake and everyone does that in life at times. I hope they will come back as better players" - Simon Katich.

Lauding the infamous trio’s decision to accept the sanctions imposed on them in the wake of the Cape Town ball-tampering scandal, former Australia opener Simon Katich on Thursday said Steven Smith, David Warner and Cameron Bancroft are “good young lads” and they will come back better players after a year.

“All three players haven’t appealed the ban. They have taken it on their chin and Cricket Australia sent a strong message that they will not condone that sort of behaviour. It’s to the players’ credit that they have accepted the ban,” said Katich, who is here as Kolkata Knight Riders’ batting coach.

“Hopefully in a year’s time, or nine months for Bancroft, we will see all of them back and playing for Australia at some stage. They are all good young lads, unfortunately they made a bad mistake and everyone does that in life at times. I hope they will come back bigger and better players,” the 42-year-old added.

On Thursday, Warner joined Smith and Bancroft in accepting Cricket Australia’s ban on them. They opted not to challenge the respective 12 and nine-month suspensions handed down by CA last week after accepting that they tampered with the ball on the third day of the third Test against South Africa.

Besides the 12-month ban, Warner has also been banned from holding any leadership role within the national team for the remainder of his playing career.

Asked if any such incident happened during his time donning the Baggy Green, Katich, who played 56 Tests, 45 One Dayers and three T20Is for Australia said: “No, because no one got caught taking sandpaper and fielding. It’s something we never did.” 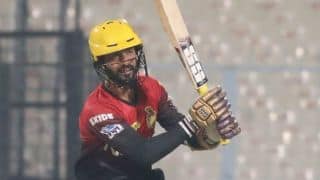