Lynn is currently going under rehabilitation following his should injury last week.

Chris Lynn‘s international career has so far been plagued with injuries. Lynn, a product of T20 cricket, is one of the most sought-after 20-over players for domestic leagues around the world. Keeping in mind Lynn s commitments, KKR assistant coach Simon Katich has asked Australian opener to preserve his body.

Katich speaking to Melbourne radio station, he said: He has to make a decision about how much cricket his body can withstand at this level. It s not so much his batting, it s his fielding. We ve had numerous discussions about how he can try and protect himself in the field, obviously diving is a big concern given his history but that s the nature of the game.

He further adds, When instincts take over and you feel like you re letting your teammates down, he s the sort of guy that doesn t want to see one of his bowlers miss out and cost them a few runs. But ultimately it s costing him in the long run. He s going to have to have a think about that and we ll be there to support him.

Lynn is currently going under rehabilitation following his should injury last week. He missed ongoing Pakistan Super League (PSL) season, and is fighting time to get fit to play in the Indian Premier League (IPL). 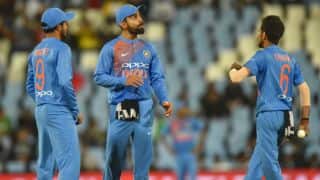 India vs South Africa 3rd T20I Live Streaming, Live Coverage on TV: When and Where to Watch