Singapore scripted history on Sunday as they defeated Zimbabwe by four runs to register their maiden win against an ICC full member nation.

Singapore scripted history on Sunday as they defeated Zimbabwe by four runs to register their maiden win against an ICC full member nation.

The match was curtailed to 18-overs per side after rain played spoilsport before the clash.

Rohan Rangarajan scored 39 off 22 balls and Surendran Chandramohan played a knock of 23 runs and the duo enabled a strong start for Singapore. However, both batsmen were dismissed in the same over. Aritra Dutta (7) also departed cheaply.

Tim David’s knock of 41 runs and Manpreet Singh’s 41run-innings ensured Singapore posting a challenging total on the board.

Chasing 182, Zimbabwe lost their first wicket with 22 runs on the board as Brian Chari (2) was sent back to the pavilion by Amjad Mahboob.

Regis Chakabva and Sean Williams put up a brief 39-run stand, but Selladore Vijayakumar dismissed Chakabva (48) in the 6th over to peg Zimbabwe back.

Sean Williams and Tinotenda Mutombodzi steadied the innings for Zimbabwe as the duo put up a partnership of 79 runs, which saw Williams bringing up his half-century.

As Zimbabwe looked set for the victory, Singapore clawed their way back into the game by picking up the wickets of Williams (66) and Mutombodzi (32).

With 40 runs more to get, Zimbabwe lost their way as they kept on losing wickets and in the end, Singapore managed to win by four runs. 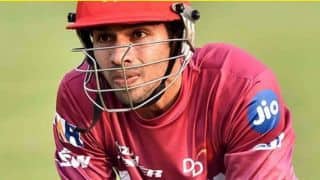 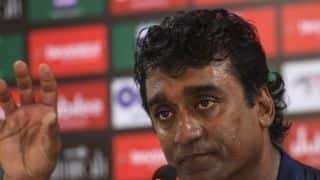 Sri Lanka coach feels if Pak series goes well, it can be ‘huge thing’ for future