"It's happened a few times this season where we've been in impossible situations and then there's one or two guys putting their hand up and making the impossible very possible."- Faf du Plessis

Wellington [New Zealand]: South Africa skipper Faf du Plessis is all praise for his team after registering an impossible victory against New Zealand in Wellington to go one-up in the three-Tests series on Saturday. On Friday, it seemed as if the Proteas would lose the match. But a splendid display of spin bowling by left-arm orthodox spinner Keshav Maharaj took the game away from the Black Caps. Maharaj took a career best six-wicket haul as the hosts crumpled in their second innings and set a modest target of 81 for South Africa to win, which they reached in just 25 overs. FULL CRICKET SCORECARD, New Zealand vs South Africa, 2nd Test at Basin Reserve, Wellington

“It’s happened a few times this season where we’ve been in impossible situations and then there’s one or two guys putting their hand up and making the impossible very possible,” Faf was quoted as saying by ESPNcricinfo. “Lunch time yesterday felt like not too long ago, and now we’ve won a Test match so just that shift in pressure was really well handled.” At lunch on Day Two, the visitors were 104 for 6 with Temba Bavuma and Quinton de Kock at the crease. It seemed as if they would lose the Test but the duo put on a stand of 160 and put their side in the lead. NZ vs SA, 2nd Test, Day 3: Maharaj s 6-for and other highlights

“We’ve found this ability to have a lot of faith in our batting line-up, whoever they are, to stand up to pressure situations. Quinton and Temba hadn’t been in massive run-spells these last couple of games, so for both of them to do it at a critical time says a lot about them mentally,” du Plessis said.

“And it was the way they played [that was impressive]. To counter-punch and put the pressure on the opposition was remarkable.” On a belter of a track and with nearly three days remaining, there was time for the Kan Williamson-led side to mount a strong comeback. The Kiwi batting line-up fell like a pack of cards and were eventually bowled out for 171.

Apart from opener Jeet Raval, who played a gritting knock of 80, none of the New Zealand batters could stay long at the crease and provide stability to the innings. “It was a challenge for us. What we asked for this morning was real hard cricketers. Mentally we needed to be very strong, to be ready to be challenged and pushed to extremes because it’s not conditions we are used to, du Plessis said.

There were no excuses; the wind and the cold were never going to be excuses. Just real, hard Test cricket and that’s what they produced, he added. The leg-spinner finished with six for 40, the best figures and second five-wicket haul in his Test career while Morne Morkel took the key wickets of Williamson, to have three for 50. The South African skipper admitted to being “surprised” because there was not a lot of spin in the wicket.

“I thought both spinners this Test match bowled incredibly well. Their consistency in their areas, the New Zealand batsmen couldn’t get way, he said.

The team teams will next lock horns in the third and final Test in Hamilton, starting next Saturday. 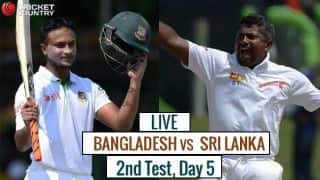