India captain Mahendra Singh Dhoni pointed out that it was the "flop" show of his batsmen in both innings that lead to a comprehensive 122-run defeat at the hands of Australia, in the first cricket Test, here today. 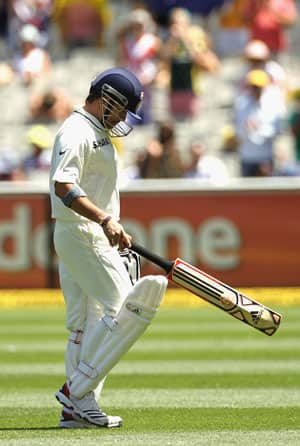 To discerners, Tendulkar’s dismissal on the second evening when he was on 73 was the decisive moment of the game Getty Images

India captain Mahendra Singh Dhoni pointed out that it was the “flop” show of his batsmen in both innings that lead to a comprehensive 122-run defeat at the hands of Australia, in the first cricket Test, here today.

“Our batting flopped in both the innings. We have to show more consistency,” Dhoni told the reporters at the post-match media conference. India could manage only 282 and 169 in the two innings.

“We had a decent start in the first innings. We needed to capitalize on it. When the day began, if we could have got them down to 240-250 runs, it was gettable. Even 292, we should have achieved as the wicket was good. There wasn’t much wear and tear on the surface,” a disappointed captain remarked.

“In the first innings, we had a good stand going and their bowlers were also a bit tired. So if we could have seen off another 20 overs with the new ball, it would have become easy to score runs. Once a bowler gets tired, he can’t bowl with the same pace and consistency.”

To discerners, Sachin Tendulkar’s dismissal on the second evening when he was on 73 was the decisive moment of the game.

“Towards the close of play, everyone wants to be at the non-striker s end. It happens to everyone. That’s why you have the concept of a night-watchman in cricket. But if a bowler bowls a gem of a delivery to get you out, you just have got to accept it.”

Gautam Gambhir (3& 13) and Virat Kohli (11 & 0) were two batsmen who clearly looked uncomfortable against the pace and bounce of the Australian tracks. But the skipper backed both players and said that he is not concerned with their form.

Incidentally, it’s now close to two years that Gambhir has got a Test century.

“Gambhir’s is not a major problem. He’s batting really well in the nets. He just needs to take that extra step and take the same form into the middle. Once you play 30-40 deliveries as an opener, everything is sorted out.

“It wasn’t the batsmen alone who made mistakes. The deliveries were good too. They were too close to the off-stump; some came in, some held their line. Session after session they bowled in the same area. After sometime, you do commit an error.”

The skipper though vehemently denied that it was often the intimidatory tactics of Australian fast bowlers which caught his batsmen napping.

“If you see the wicket, it wasn’t an ideal one. It had a spongy bounce, the short deliveries were not coming at fast pace. They bowled nagging line, their line and length were both very good, it wasn’t the short stuff which had us worried.”

A moment in the game was three consecutive bouncers which James Pattinson bowled at Zaheer Khan on the fourth evening.

Dhoni confirmed that umpire Ian Gould did warn the bowler about the intimidatory tactics.

“He (Pattinson) was warned by umpire. The umpire approached us because he wanted fielders and us to be kept away. It was handled in a good way. He wanted to make sure that we all are moving in the right direction.”

Dhoni though was clearly perked up by the performance of his bowlers who were able to take 20 wickets without conceding too many runs in the match.

“I look at positives. Big positive is you need to take 20 wickets and we could do it here. The opposition got the scores which we could’ve managed if we had batted well.”

Indian skipper defended his decision to give new ball to Umesh Yadav ahead of experienced Ishant Sharma in the second innings, a decision which was vindicated when the young fast bowler took three early wickets.

“We didn’t start with Ishant because Umesh is a swing bowler while Ishant is back-of-length bowler. We needed someone, who could use the second new ball well and that’s the reason we began with Ishant. Overall, I felt Ishant bowled very well, he was beating the bat but sometimes you don’t get the edge.”

Australia added 61 runs this morning after having resumed at 179 for 8. It wasn’t much different to the first innings when India had Australia down to 214 for 6, yet they went on to make 333 runs.

“It hasn’t deflated us. But we need to keep an eye on.

Even in the first innings, their lower order put on decent runs. If you look at two innings, the final two wickets put on nearly 100 runs.”

Dhoni feels that it was lack of reverse swing that let Australia score 333 in the first essay.

“On the first day, the tail flourished because we were not able to get reverse swing since the wicket had moisture and was fresh. The conditions were not helpful. We need to have a formula to get the lower half out, especially if they are batting nearer the 65-over mark.”

There were quite a few decisions which didn’t go in favour of the Indians but Dhoni says he would rather rely on umpires to give decision on the field than take the help of technology.

“I was a big fan of Hot Spot before the England tour.

After the tour, I’m not so sure now. Same with snicko-meter. I would rather show faith and rely on umpires who have been doing the job all these years. If umpires are consistent, I don’t mind.”

Dhoni said that umpires should always be bold while they give their decisions.

“But umpires ought to give their decisions boldly. They shouldn’t go into their shells. It’s a difficult job for umpires. Unlike a bowler or a batsman, they have to be in the field on all five days.

“They just need to back their decisions. They don’t need to be God. Mistakes are part and parcel of the game. If it’s not done intentionally, I’m perfectly ok, if umpires make genuine mistakes.”

It was the fifth successive Test which India lost on foreign soil, yet Dhoni termed the year 2011 as almost perfect for his team.

“There were phases when we didn’t do well. England being the one patch where we didn’t win a single game. But the World Cup was a most treasured moment. It gave us immense pleasure. We were not as consistent as last year, but it happens in cricket because of form of batters and bowlers. If we had done well in England, it would have been a perfect year.” (PTI)