Most of the matches will be played at mid-night as per NZ time.

New Zealand cricket fans will not be able to view their country breathe new life in their rivalry with South Africa. They played their last match against the South Africans at Eden Park in the 2015 World Cup semi-final. Now, the issue is  that Sky TV has not been able to get the rights to broadcast the opening match of the tour. This is before the scheduled T20 match to be played in Durban on Friday. It shall be played at 4 am of Saturday as per New Zealand time. Kirsty Way, who is the Sky TV spokeswoman has confirmed that arbitration and negotiations with the agent (who is working on behalf of South Africa Cricket) have failed, but she asserts that Sky TV will keep on trying. READ: New Zealand vs South Africa 2015: Black Caps need to be watchful

In a conversation with stuff.co.nz she said, “We’ll keep negotiating even after the first T20, but we haven’t secured them at this point in time.” This is the second time in August that their offer has been turned down. As of 17.00 hrs on Friday, no deal could be finalised even at the last moment. It is believed that a high price of the rights is the sticking point. ALSO READ: New Zealand will miss Ross Taylor sorely on South Africa tour 2015

Since, most of the matches were be played halfway of the night as per New Zealand time, this series was thought of to not catch enough eyeballs and hence not regarded  to be sold for a high amount. However, Sky TV has said that they will enlighten the audience about the proceedings and nitty-gritty  of the matches through other platforms, in particular social media and internet if they get the rights midway through the series. This series has three ODIs (at Johannesburg, Potchefstroom and Durban respectively). It also includes a T20 which will be played at Johannesburg. 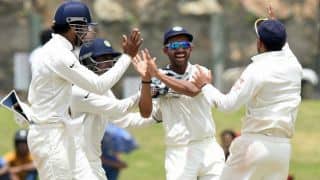